On the day before our Thanksgiving break, (when students are just counting the minutes to leave) we did some activities that gave them a mental break but at the same time continued with the plan of providing comprehensible input as much time as possible.  With the target structures being: to give (thanks) in all verb forms.
1) Individually, I asked them to think of five things that they are thankful for.
2) Then, in teams of three they had to narrow the list down to 4.
3) Choosing a partner from a different team, students were to reduce the list to only two.
4) Using only Spanish, I asked the group to tell me what the results were as I was writing the on the board.
Lastly, I wrote the words (color-coding them): "lujo" (luxury) and "necesidad" (a need), and asked my students to categorize each of the words in the list.  When they were defining them, I circled other structure: "no toda la gente tiene..." (not all the people have...) and "por eso, es importante dar gracias" (that is why it is important to give thanks).  This is more or less how the circling went:  when they categorized "casa" as a need:
"Yes, it is a need.  Defined as a "lugar para vivir" (place to live).  Clase, does everybody have a place to live?  No, not everybody has a place to live.  There are people living on the streets.  Who lives on the streets?  Do I live on the streets? Clase, are there people living on the streets?  Are there people who are cold because they don't have a place to live?  Yes, that is why it is important to give thanks because we have a place to live."
With this activity, I circle the target structures not only by saying what they give thanks for, but reflected and engaged in conversation comparing their lives with other less fortunate people.  The point of reflecting was powerful! I saw it in their facial expressions.  Lastly, I had them choose two of the things that personally they were thankful for, and wrote them in a leaf or a turkey to post on the hallway wall.  If I could do it again, I would add a power point presentation with pictures of people lacking what students are thankful for, so that the reflecting part becomes more meaningful and also to provide more points of conversation.
﻿
﻿﻿
﻿ 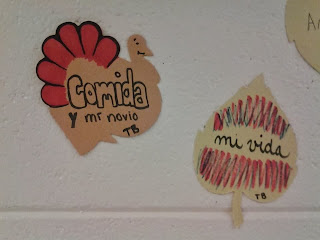